Disclosure: Some of the links on this page are affiliate links, therefore I may be compensated if you purchase when clicking through my links. This helps keep the website running.

The notion of changing trick-or-treat day is a highly charged debate!

In years past, it was almost unheard of to trick-or-treat on any day other than October 31st.

Today, more and more municipalities – and even individual neighborhoods and homeowner’s associations – are changing trick-or-treat dates for Halloween based on forecast inclement weather. Some cities who are anticipating unusually high traffic volumes due to concerts on October 31st are even considering making changes for reasons of traffic.

Let’s take a look at both sides of the argument.

“It’s safer!” – the argument FOR CHANGING the day

Since Halloween comes around only once a year, those in favor of changing the day want to have the children enjoy the event to the fullest. If a big snowstorm – or worse, an ice storm – comes into town, children may literally be snowed in at home. They may be limited to trick-or-treating just one or two houses away.

Those individuals in favor of changing trick-or-treat day feel it’s better for the children to trick-or-treat on another day when they can do it more safely, for longer, and get more candy too.

In the case of unusually high traffic patterns, some cities feel that it’s better to play it safe – each Halloween, there are traffic accidents causing harm to child pedestrian trick-or-treaters. High traffic volumes due to concerts drawing a large out-of-town crowd compounds the problem further: more traffic, and more people coming in from other areas who are not familiar with the local roads or directions putting local kids at risk.

Above: I recommend Spirit Halloween if you're looking for great costumes for your kids at an affordable price point.

“What’s next – changing the date of Thanksgiving?” – the argument AGAINST CHANGE, for KEEPING trick-or-treating on October 31st.

Those in favor of keeping trick-or-treating to October 31st even in inclement weather feel that it’s unnecessary to move the date of a festival like Halloween. They say that parents simply need to use good judgment about how long or how far away the child can go for trick-or-treating. If the weather is severe, so be it – that happens some years. That is the case for certain other holidays, and no-one talks about moving Thanksgiving!

As for traffic patterns, the argument asks if it’s reasonable for an entire city to move trick-or-treat day for something that will affect only a small portion of the city (e.g. areas near the concert arena, etc)?

If this means that one year kids can’t trick-or-treat as much, or their costumes aren’t so visible because of rain gear, that’s just part of life, according to this side of the argument.

Another point in favor of keeping trick-or-treating on October 31st is due to concerns for economic disruption otherwise. For example, most households have already bought their Halloween candy before October 31st, regardless of if the weather ultimately allows a lot or a little trick-or-treating. But if instead trick-or-treat day is moved to another nearby date, it can interfere with other events (e.g. school fundraisers) which were originally scheduled that day to purposely not coincide with trick-or-treating.

Ultimately, a bit of flexibility is key. Even if you don't agree with changing the date for trick-or-treating, ultimately it's the municipality that has the power to make that decision, so for the sake of your child it's good to just go with the flow if they make changes. I've learned the hard way not to try to make other plans close to trick-or-treating night, just because they might switch trick-or-treating.

Where to buy formal clothes for boys - suits, blazers, and more 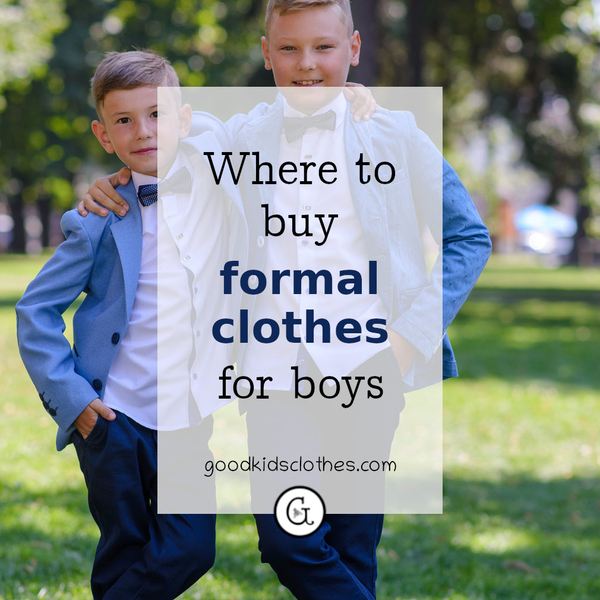 Are you looking for formal wear for your boy? If so, here is the complete guide to formal clothes for boys of all ages, from toddler to teen boys. I speak from experience here - I recently had to buy boys formal wear, and noticed that some kids clothing stores were much better than others for this.

Don't worry, I've got you covered! In this article we'll look at everything your boy might need depending on the event: blazer, dress pants, suit set, and button down dress shirts.