7 cheap and easy pork and chicken recipes that your family will love! Beef is so expensive here in the U.S. at the time of writing this article! Even if beef isn't causing issues with your family's budget, you may find as I did that you can get much better cuts of pork, and chicken breast, for half the price or less than beef.

But for many of us, ground beef recipes have been a tried-and-tested part of our family's meal plan, and it's hard to know what to replace these meals with. Don't worry, I have you covered! Here I tested out a bunch of different pork and chicken recipes out on my family over the course of the past several weeks, with pics of the results. These are all great recipes that are cheap, easy, and relatively healthy (not containing cream cheese or lots of pre-made items, etc). Best of all, they are family-friendly.

My testing crew comprised of my youngest child who is a very picky eater, my husband and my older child who are less picky but have opposing tastes to each other, and me (not picky). Finding a meal that all 4 of us like is always a challenge! These meals went over well with everyone. Another factor that works in your favor is that although I enjoy cooking I'm not an especially good cook, meaning that if these recipes turned out well for me, they're likely to turn out even better for you!

Let's take a look at the recipes. 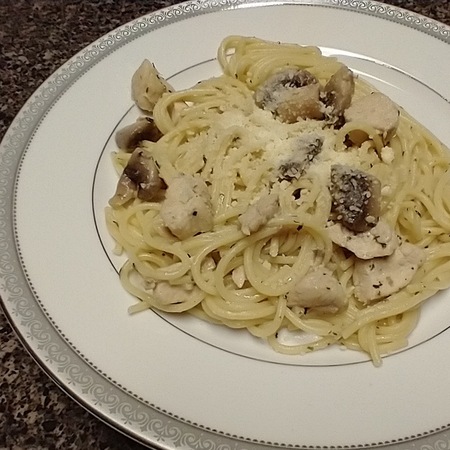 This is one of our absolute favorites. It's so fast, easy and tasty that this now has earned the most frequent spot in our meal rotation. The original recipe, which I'll link to in a second, did not have chicken in it - it was actually a vegetarian recipe, although it can be customized as you wish. Since we're not vegetarian, I simply added chicken breast that I cooked, and it's absolutely amazing - I'll give you the instructions for how to do that next.

Get the original recipe for mushroom aglio olio at MyFoodStory.com, and to make the chicken version, you cook diced chicken breast (however much you would normally use for your family) in the olive oil before adding the mushrooms. The rest is all the same as in the original recipe.

The pic above is when I made it with the chicken breast, but on another occasion I tried it with shredded chicken, and that was even better! I wouldn't suggest you go to the extra bother of creating shredded chicken especially for this recipe, but if you happen to have some on hand from leftover roast chicken, or a rotisserie chicken from the store, this is a fantastic way to use up that shredded chicken that tastes amazing! You could alternatively make it with ham or bacon, I bet that would taste pretty delicious, but I haven't tried that yet. 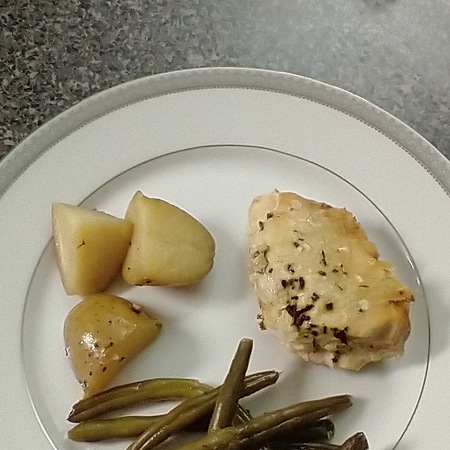 As busy parents, we all love slow cooker meals where the entire meal is made in the slow cooker. No need to then prepare sides - it's an all-in-one meal. There's also no need to pre-cook, saute, etc before placing the items in the slow cooker, so this will appeal to even the busiest parents. My entire family enjoyed this meal of seasoned chicken, potatoes and green beans - there's nothing not to like! Even those who don't normally like veges will find that the seasoning makes the green beans taste great, plus being cooked in the slow cooker with the chicken they gain some extra flavor from that as well. Above is my pic of the plated meal.

You can get the recipe for slow cooker seasoned chicken, potatoes and green beans at The Magical Slow Cooker. I made the recipe exactly as is. This is a wonderful meal to come home to after a busy day. And the slow cooker makes it so easy to handle those days where your kids have after school activities and there's no time to easily cook in the evening. 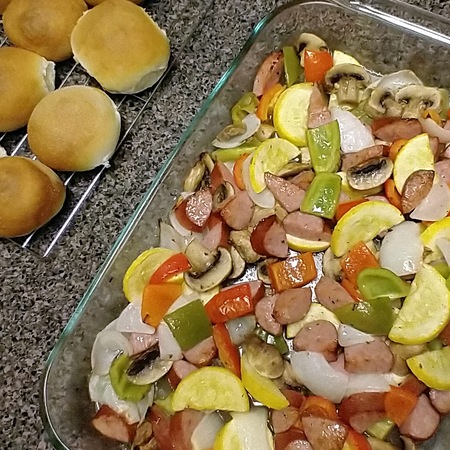 This crowd-pleasing smoked sausage and veggie sheet pan bake is a great way to introduce a new vegetable to your kids while placing it with veges they might already like. The smoked sausage is a very kid-friendly way to get protein in. There is a sauce (not as obvious in the picture) that adds a nice flavor to the meal, so even if your kids are not normally into veges, you might find they'll like this. This recipe can be customized to your family's tastes in vegetables - use what you have on hand, too. There is no need to stick exactly to the recipe. I made substitutions compared the original, which I'll mention below, because various family members don't like certain vegetables. One tip: I recommend keeping the onions in even if you aren't normally a fan of onions. While I don't like raw onions on a burger or in a salad for example, these onions when cooked in the sauce do not taste too 'onion-y' and actually are a bit refreshing, so at least try it with some onions the first time.

The smoked sausage and veggie sheet-pan dinner is from Taste of Home and I served it with oven rolls. You could also serve it with any type of potato, or even over rice if you want to do something a bit different.

Since the original recipe has Brussels sprouts, and we're not big fans of those, I substituted extra bell peppers instead because that tends to be a bit more kid-friendly. Also, for the zucchini and yellow summer squash, just use what's available. For example, 2 zucchinis if there is no yellow squash, or vice versa. You can substitute any of the vegetables to customize exactly for your family's tastes, you just want to keep the overall volume the same. 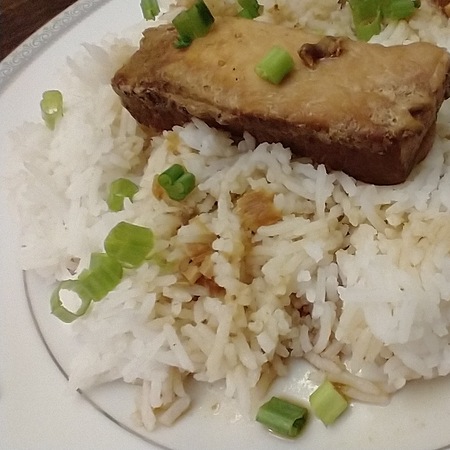 Mmm, this slow cooker Korean-style pork was a big hit with everyone! It comes with a delicious sauce of which you can dish up as much or as little as you like. My husband loved adding the sauce to the rice, but my picky youngest child preferred his without the sauce, so it was great that they could customize their plates accordingly. Everyone agreed the pork tasted amazing like this! Also, it flakes off the fork deliciously because it's been cooked long and slow in the slow cooker. My husband flaked his into his rice, while my youngest liked to eat his pork and rice separately. So everyone can eat it how they want. The original recipe was for beef short ribs, but I replaced it with pork (more about that below) and it was perfect.

You can get the recipe for the slow cooker Korean-style ribs from Fit Slow Cooker Queen - there's also an Instant Pot version of it there for those of you who have one. Although the recipe calls for beef short ribs, I used a cut of pork called Country-style Ribs from my local Walmart mini-store. It was a very affordable cut of meat - again, less than half the price of beef, and these thick boneless strips of pork were amazing! Other than replacing the type of meat, I followed the recipe exactly.

Next time I'll try it with large carrot chunks added into the slow cooker at the same time so I can get the veges in without having to do a separate side. The slow cooker was very easy to clean after this meal, I didn't have to deal with stuck-on bits of sauce, etc. 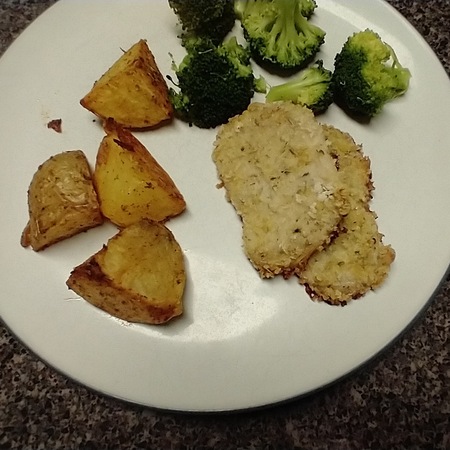 Instead of the more usual pan-fried beef schnitzel, I decided to try this oven-baked pork schnitzel recipe from Recipes Made Easy. It's healthier and more convenient to bake it in the oven - no splatter or mess, and of course much easier to cook a family-sized batch in one go. As you can see from the image, I served it up with oven-roasted potatoes and steamed broccoli. The recipe calls for thick pork chops that you pound with a meat tenderizer to thin them, but who has time for that?! So instead I bought Thin-cut Pork Chops from my local Walmart mini-store (thin-cut cost the same as the standard thick-cut anyway!) and used that as it was without pounding.

The testing crew enjoyed this meal, even though I accidentally cooked it for too long. This was because I didn't realize that the bottom would be done faster than the top, so the bottom of the pork chops was crispier than I would have liked. We were still able to cut it with an ordinary knife (not a steak knife!) so I'll call that a win. 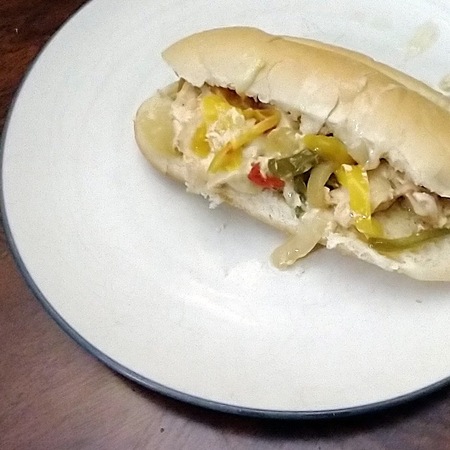 I found it fun and easy to make this crockpot chicken Philly cheesesteak recipe from Family Freezer. Best of all, once the slow cooker was done, all I had to do was literally ladle out the contents into a hoagie bun. This was so easy! And cleanup was a breeze.

I would recommend using a spoon with wide slots to dish up, because I found that otherwise the contents can be a bit more sloppy than desired when in the bun. This was more of an issue for the bits toward the bottom of the crockpot though. 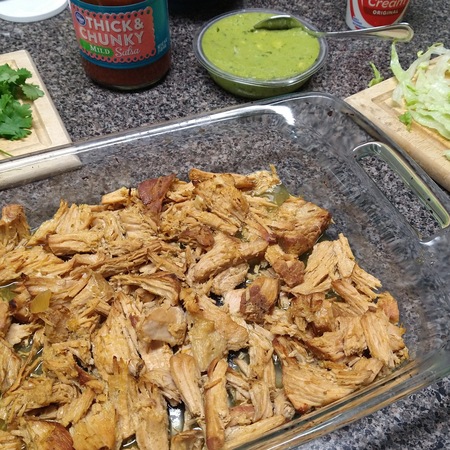 I was in two minds about whether to include the slow cooker pork carnitas in this article, but because my family enjoyed it so much, I decided to put it in. You might be wondering why I was considering leaving it out if it was so tasty? This is because this meal was a bit harder to make than the other recipes. The prep time was longer than any of the other meals - and that was just for the slow cooker prep. At the other end of the day, you'll need to serve it with something, such as tacos. So then you're putting together a bunch of things when you're tired. It's true that no more cooking is required after, but it's still a lot to do in total. If my kids were really little and needed me every second, I don't think that on balance I'd want to make this - but I have an alternative below.

The verdict from my family was that they enjoyed the make-your-own aspect of the meal. They would like to see this meal again but would be equally happy with seasoned shredded chicken (e.g. leftover from roast chicken) in place of the pork carnitas. If, however, you want to take the plunge and try the pork carnitas, then you can get the slow cooker pork carnitas recipe from Spend With Pennies.

Try out any of these 7 family-friendly recipes to enjoy better and cheaper cuts of meat than beef! Now you can happily replace any of your beef meals with these easy pork and chicken recipes. 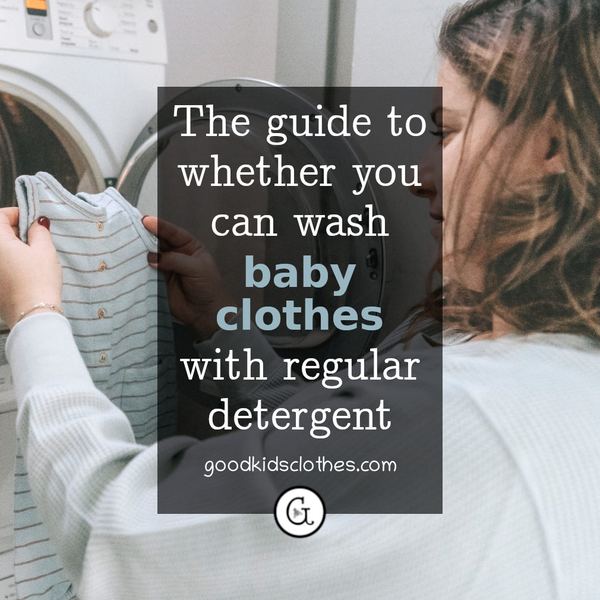